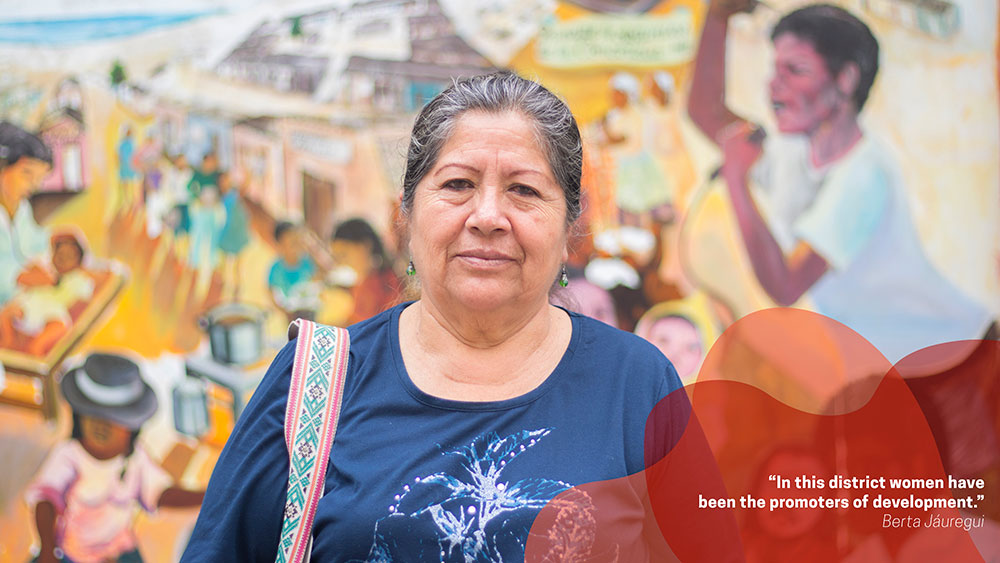 Villa El Salvador was born out of sand. In 71’, hundreds of families from all over Peru came to Lima looking for new opportunities, for a place to live and build a history of their own. Just like that, from the sandy outskirts the city was born. Decades later, the fifth most populated district in the capital, carries on its shoulders a history of community cooperation and persistence.

In a city already dangerous for women, Villa El Salvador holds some of the highest rates in violence and femicide in the capital. In 2017 there were 3,006 cases registered in the Emergency Center for Women (CEM in Spanish). At the same time, a long and renowned tradition of organizations of leaders who are women is ingrained deep in Villa’s roots. A tradition that is not only alive, but one that has grown and evolved, and today gathers their original and new members in a joint effort to hopefully build a fairer society for all. These are the women whose stories inspire us.

Berta Jáuregui’s story is one from the first generation of women that have left a mark on the district… A woman that “stepped out of her house”, a young mother, who through the organization found her voice and her calling to transform through her leadership.

She began her journey in soup kitchens and tree-planting committees, efforts to move her district forward and improve people’s quality of life. Berta remembers that the men would work and it was them who would then start the change from their neighborhoods. This was the situation when the first women organizations arose.

They needed recognition for their involvement and their work, for their voice to be heard. Since the creation of the first Villa El Salvador Women’s Federation (FEPOMUVES in Spanish)in 83’, this recognition was achieved and their results multiplied. The committees for “Vaso de Leche” (Glass of Milk, a government-funded and citizen-led nutrition initiative) were put in place, soup kitchens increased in number, and beyond generating spaces needed for survival, they kickstarted efforts to help women who were victims of violence, “women like you or me,”says Berta. 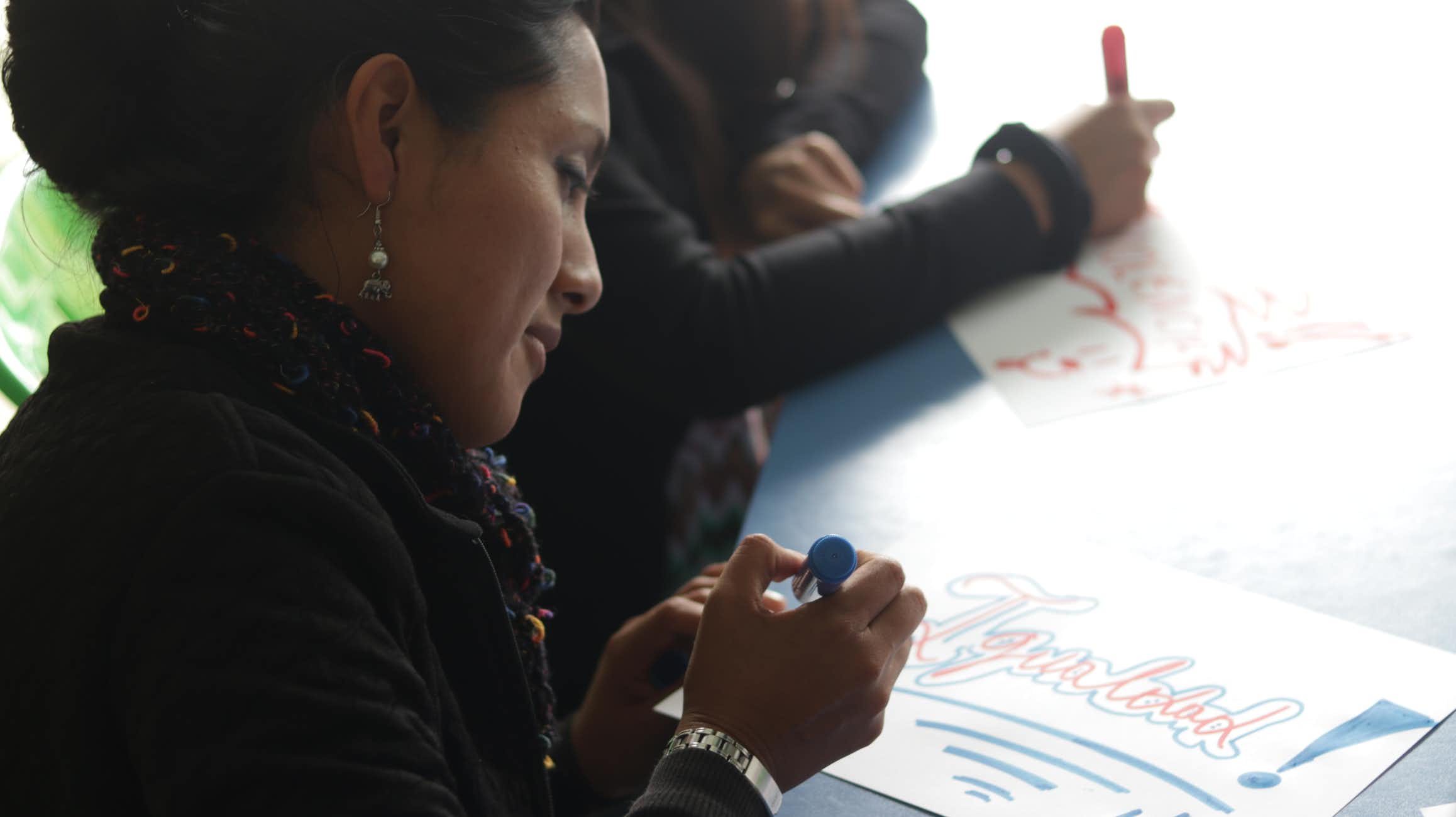 Through her work with the Federation, and now with the Collaboration Committee for Gender Equality, she has been able to participate in several initiatives to eliminate violence against women, a problem that affects all of us, regardless of our gender. “A woman suffering from violence becomes a concern, not only for society, but for the entire country.”

The initiatives that Berta is involved in include the strengthening of institutions, the mapping of which district zones are dangerous for women and the struggle to place women’s priorities in the public agendas of municipal authorities. Additionally, they emphasize the training of women themselves, to empower them and recognize them as individuals with rights, all so they can live a life without violence.

However, currently there’s a significant generational breach that has to be addressed. Young men and women have to embrace the organization’s tradition and get to know the history of their district. “There’s a sort of divorce,” Berta says, “between the new generations and Villa El Salvador’s history.” As they get to rediscover these tales of struggle, they’ll be able to work in the prevention of gender violence and build their identity from these experiences.

“The identity of a town is acquired through its history.” And Villa’s is one of unending struggle. 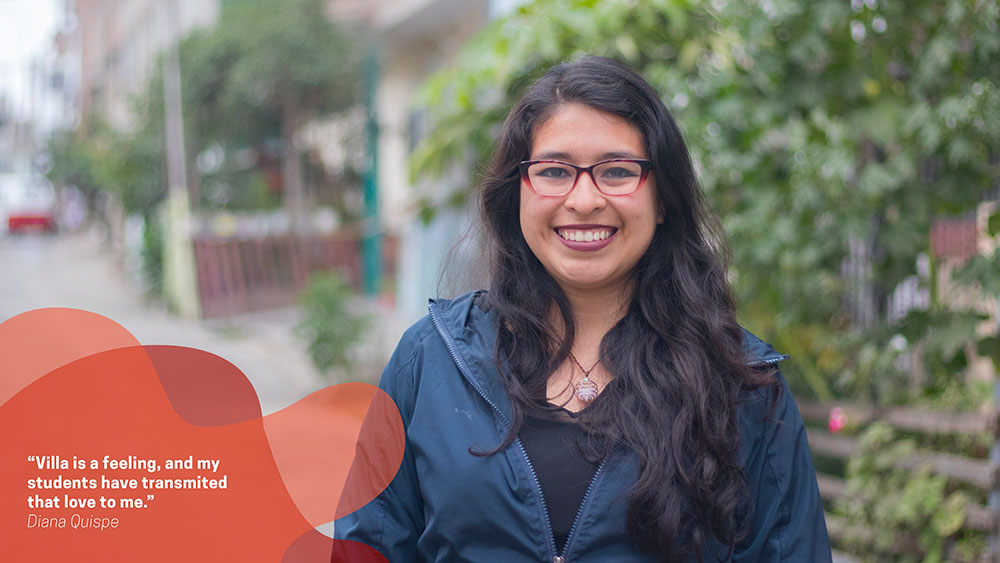 All forms of gender violence are connected. Supporting this political formation gives the tools women need to be active members of their community, so they can start to face the problem of violence front and center in their community and perhaps ingrained in their own lives.

As an organization, they have secured an alliance with the National University of San Marcos, one of Peru’s biggest public universities, to certify women that participate in their workshops so they’re not only able to learn, but have proof of their education. A tangible proof that they’re one step closer to being out of the difficult situations they live every day.

“There’s only so much we can teach at school, but these women suffer violence in their daily lives.”

“In my house, the most important things I learned about empowerment, were things I learned from them,” she says about her mom and her grandma, who taught her independence, perseverance and solidarity. One should never forget the women who came before, and the steps they took toward a better future for all. 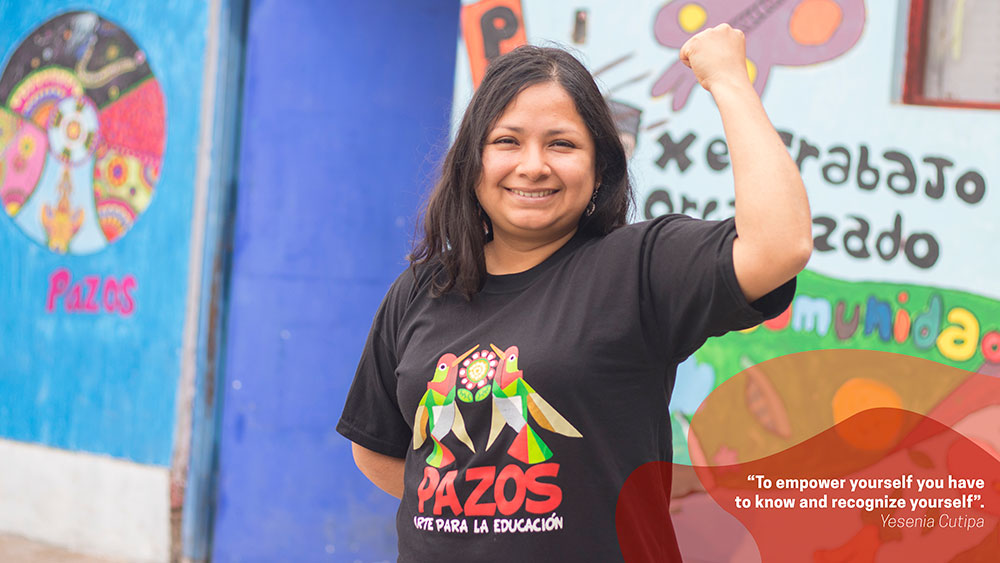 Yesenia Cutipa had to distance herself from her past to be able to turn around and see her district from a different perspective.

“To empower yourself you have to know and recognize yourself,” she says. Recognizing that violent roles and gender stereotypes existed in her district and she was living among them motivated her to feel the need to change.

Since 2008, the organization “Pazos, Art for Education,” and more specifically, the Pazos School for Women, have been platforms for her to work to destroy those roles and help women who also feel threatened by them, using art as an entry strategy to a difficult topic like violence in a woman’s life.

Through theater and batucada (Afro-Brazilian style of percussion music) workshops the women in the school learn to know themselves and form strong bonds with their fellow students. This is a safe space, a space of trust and friendship. In them, women learn to see themselves in other women, signs of a violent past. In these conversations, victims of violence can find a community they can trust, and networks of human connections are created, vital to recognize they’re not alone and that they don’t have to feel the way they do.

The art as a tool of leadership and transformation opens the door to a unique type of sensitization, says Yesenia. Art moves you, transforms you, and creates a space to know difficult experiences, to reflect, and generate ideas to face violence and share what these women feel.

Yesenia had to leave her neighborhood and distance herself to see it from another perspective. And when she did, she came back. She did it for the women, her students, those who still live with violence in their lives.

“So that they can empower themselves and know that there’s another way to live.”

Women like Berta, Diana and Yesenia will be strategic allies of the United Nations Development Programme (UNDP), that through the project “Justa, Villa El Salvador for Justice and Equality”, looks to identify leaderships, strengthen the organization, promote intergenerational exchange and improve the district’s abilities to prevent and fight against violence against women.

Villa El Salvador is one of 4 local governments in the world, and the only one in the Latin America and the Caribbean region to be chosen to pilot this program.

Villa El Salvador is a district with tradition. With hope. With history. With valuable women and figures that have become national idols, spear forwarding these organizations. With women like Berta, Diana and Yesenia, who work every day to help other women, work with them, empower them and contribute to the hopeful efforts of building a less violent Villa. A society where they can see themselves as equal citizens, with the right to live a life without fear, a life without violence.