Inicio/Centro de Prensa/Noticias/Beyond Homophobia: exploring the lives of LGBTIQ people from the standpoints of academia, activism and the arts

Beyond Homophobia: exploring the lives of LGBTIQ people from the standpoints of academia, activism and the arts

Over the past few years the human rights of LGBTIQ persons have received increased attention throughout Latin America and the Caribbean.Victories were celebrated by the LGBTIQ

community, such as the historic opinion on Gender Identity, Equality, and Non-Discrimination of Same-Sex Couplesissued by the Inter-American Court of Human Rights that is based in Costa Rica; the Declaration of the Trinidad and Tobago buggery law as unconstitutional by its High Court; the overturn of the ban on same-sex marriage by Bermuda’s Supreme Court or the overturning of a Victorian-era law banning cross-dressing in public by the Guyana highest court, just to name a few. However, many Caribbean countries continue to criminalize same sex relationsand have not taken concrete action to protect the rights of LGBTQ people which has resulted in pervasive stigma, discrimination and violations of the most essential human rights of LGBTIQ people.

With the aim of giving visibility and expanding the discussion around LGBTIQ experiences in the region and the diaspora, the first “Beyond Homophobia” symposium in 2015 and the first regional conference in 2017 gathered academics and representatives from Civil Society organizations at The University of the West Indies, Mona. Contributions ranged from literary criticism, methodological interrogation and ethnographic research to a trans workshop, photography exhibit and poetry readings, with such noteworthy contributors as Rinaldo Walcott and Kei Miller. UWI Press will publish an edited volume of select papers stemming from the conferences in 2019. 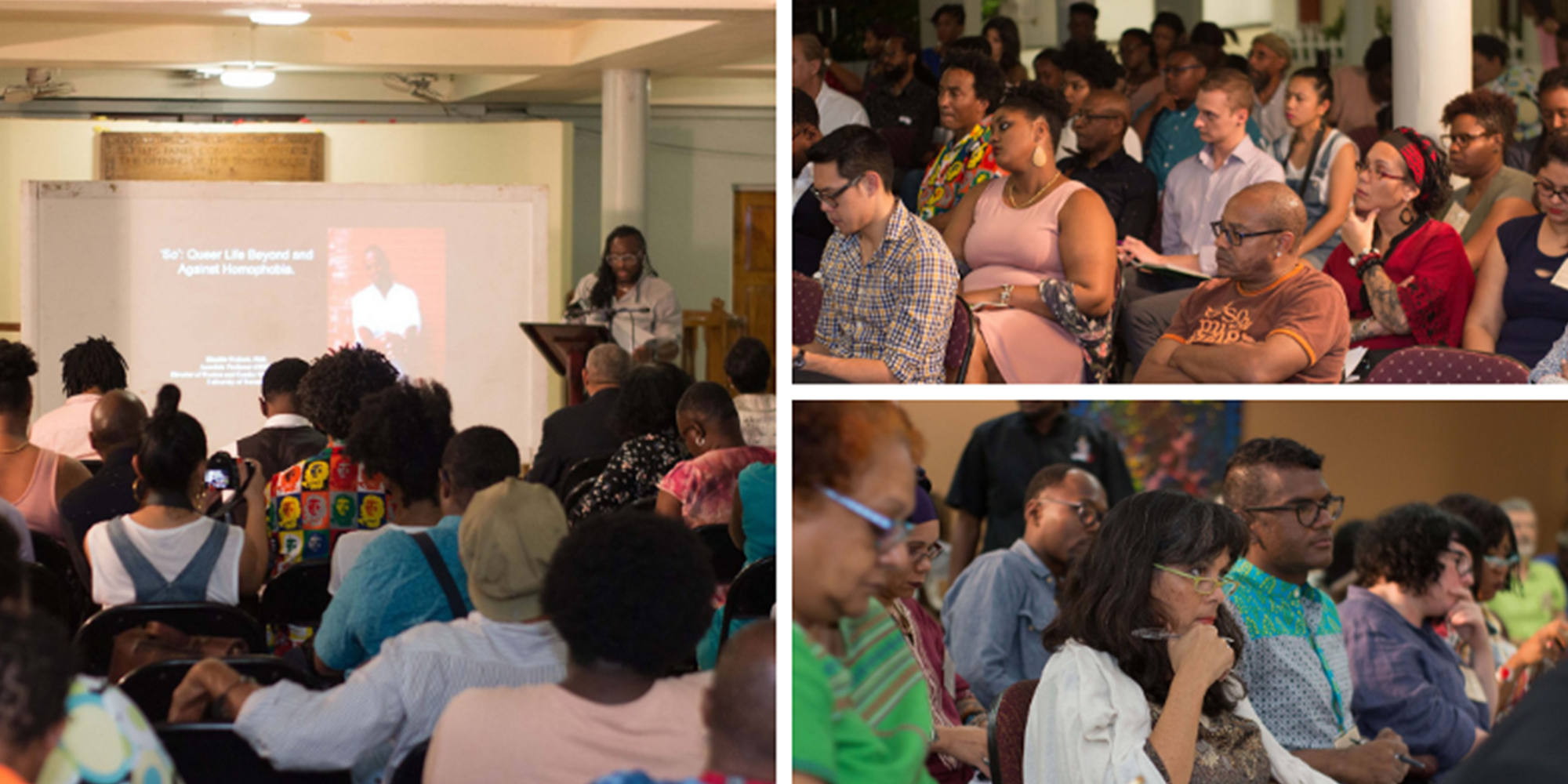 Previous editions of the Beyond Homophobia event — © Pride JA Magazine

In view of the considerable interest and relevant outputs from these previous editions, a second biennial “Beyond Homophobia” regional conference will be held from January 24–26, 2019, again, to explore and understand the lives of LGBTIQ individuals and communities in the Caribbean in ways that allow them to be at the front and center of their stories, rather than the objects of others’ stories. Under the theme “Navigating the State”, the conference will explore how LGBTIQ individuals and communities position themselves vis-à-vis Caribbean governments. To advance the attainment of human rights by LGBTIQ persons in the Caribbean it is necessary to examine the dynamic spaces within which democratic rights are realized. Distinguished lawyer and columnist Philip Dayle will give a keynote address entitled “From Guerilla Warfare to Full Moral Citizenship: The Journey Not Finished.” The 2019 conference will feature an expanded arts component, supported by the British Council, Outburst Queer Arts Festival, the Jamaica Association of Diverse Business (JADB), 360 Artists and Weekly Projects.

Beyond Homophobia 2019 thus promises to be rich in discussions, including panels and presentations that focus on education, the private sector, the media and strategies to hold governments accountable, staying true to its commitment to exploring the lives of LGBTIQ people from the standpoints of academia, activism and the arts. There will be a range of presentations (in English, Spanish and Portuguese) from across the region and the diaspora covering issues of citizenship, economics, recognition, law and more. Two sessions will be streamed through the Facebook account of the “Being LGBTI in the Caribbean” project: the first one entitled “Black Queeridades: Comparative Perspectives from Cuba, Brazil and Jamaica” and the second one being “Parading Our Defiance: Exploring the 2018 Pride Parade Celebrations in the English-Speaking Caribbean and their role in Advocacy”.

The conference will be the third collaboration among the University of the West Indies, Mona’s Faculty of Social Sciences, the Institute of Caribbean Studies and J-FLAG, who are joined by the UWI Mona’s Faculty of Law, Caribbean Vulnerable Communities Coalition, and Jamaicans for Justice. With the continued support of the LGBTIQ community, the University of the West Indies, and committed external parties such as the United Nations Development Programme, we are confident that this conference will endure as a rich opportunity for discussing the lived experiences of LGBTIQ persons in the Caribbean!