Mothers are more likely to have quit, been furloughed or lost their jobs, according to the UK’s Institute for Fiscal Studies.

Working mothers in the United Kingdom are faring worse than fathers since lockdown began, a study shows.

Women with children are more likely to have lost their job or have been furloughed, according to the Institute for Fiscal Studies (IFS). The research shows that working mothers’ working hours have fallen more, proportionally, and their work time is interrupted more often by childcare.

Around the world, lockdowns and school closures are putting more pressure on families, with children staying at home and needing to be entertained or educated. While this is putting additional burdens on all family members, the IFS’s study shows that, in the UK, mothers are bearing the brunt, and that this could have a long-lasting effect on their prospects.

“Of parents who were in paid work prior to the lockdown, mothers are one-and-a-half times more likely than fathers to have either lost their job or quit since the lockdown began,” the researchers wrote. “In all, mothers who were in paid work in February are nine percentage points less likely to be currently working for pay – either remotely or on-site – than fathers.” 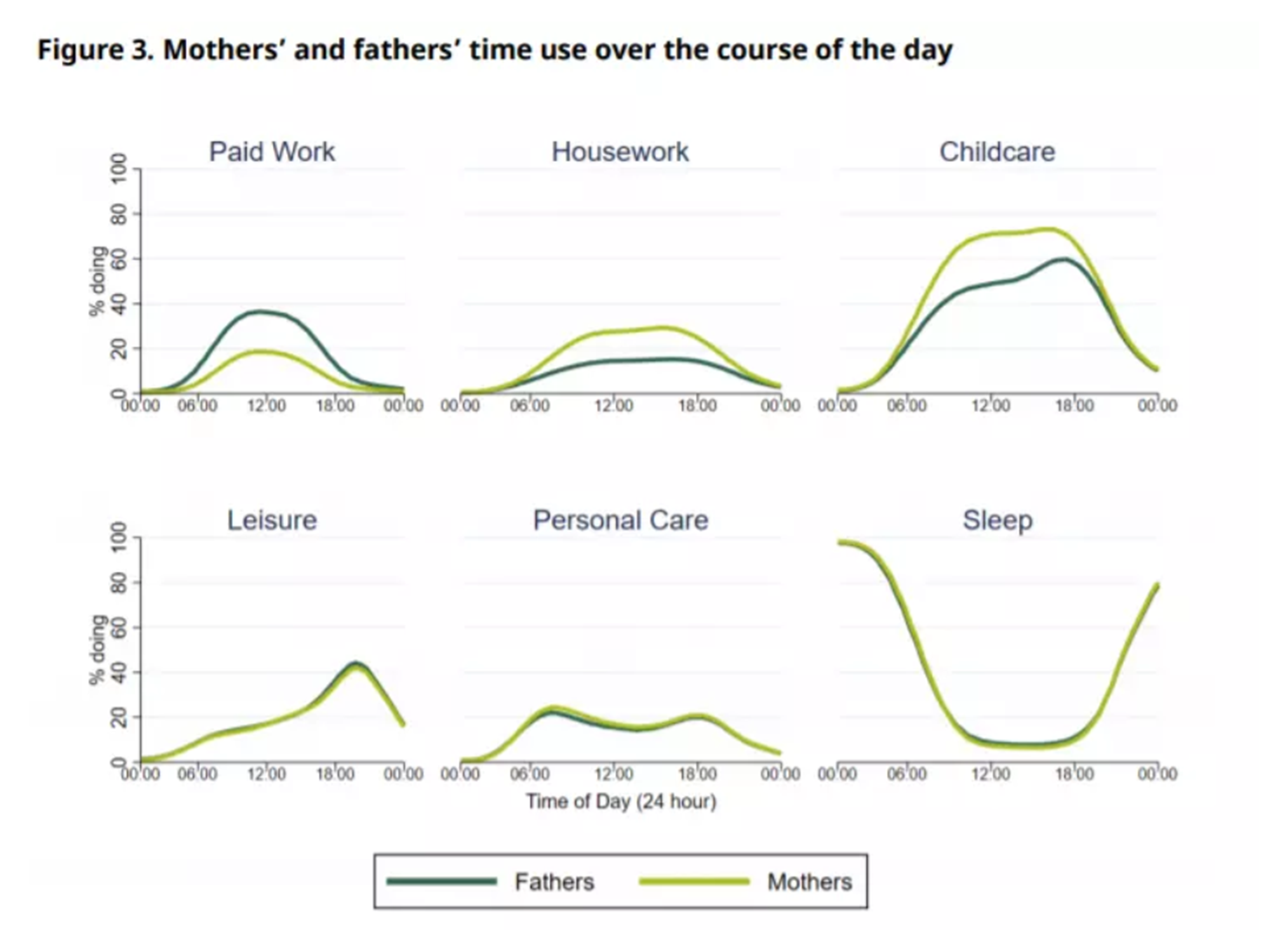 Mothers in the UK are spending more lockdown time on childcare and housework than fathers.

Schools and nurseries across the UK began to gradually reopen from 1 June. But a large proportion of school-age children remain at home, in the care of their parents, who may also be working. And the UK is not alone, with efforts to contain COVID-19 shutting schools in more than 100 countries, and affecting almost 70% of the world’s student population, according to UNESCO.

Globally, how and when to reopen schools is one of the most difficult decisions facing policy-makers, grappling to balance the risk of reigniting infection rates against longer-term consequences to social development. Schools have reopened in Germany and France but remain shut in Spain and Italy. In the United States, many schools will remain closed until September. 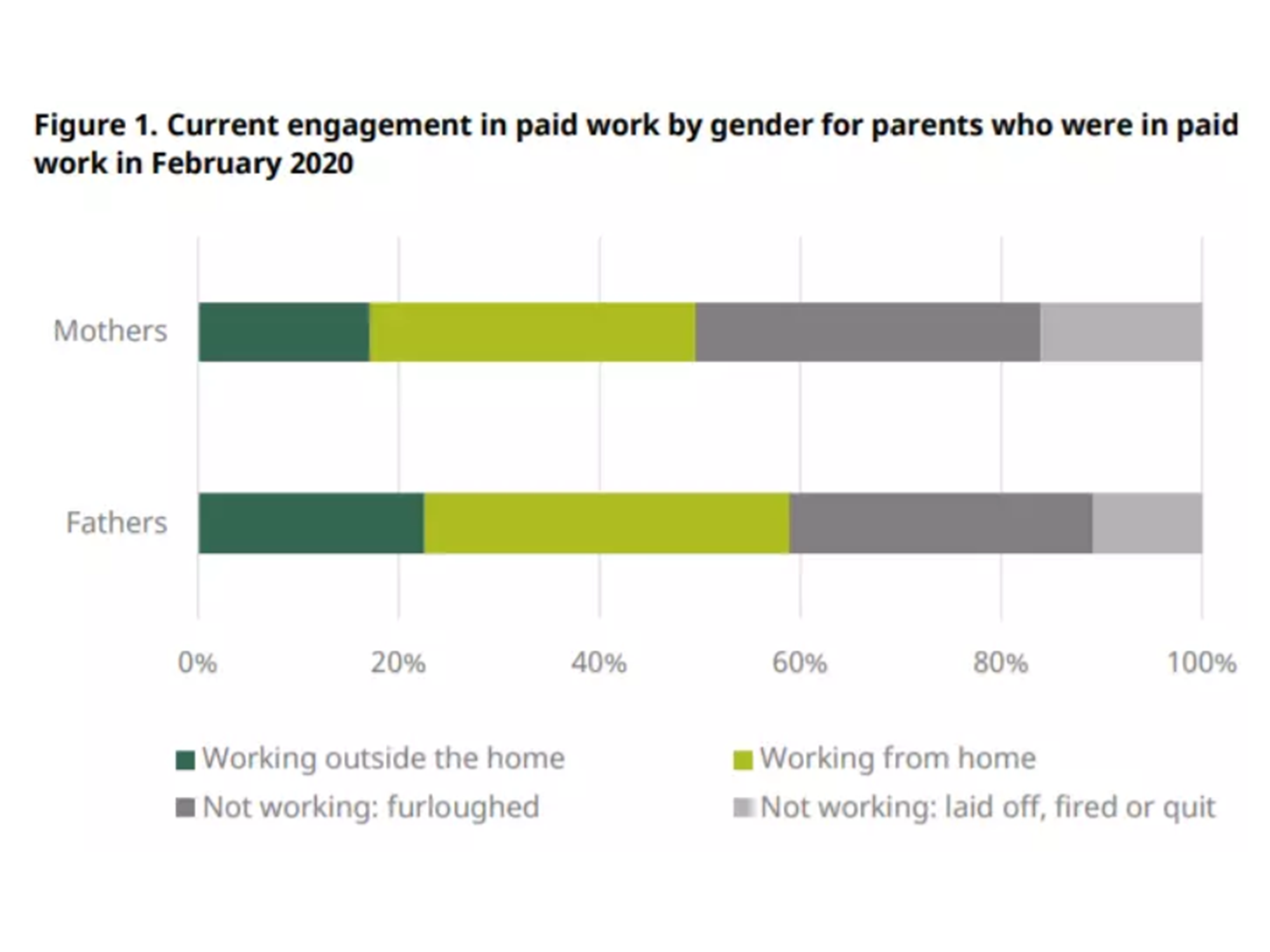 The gender pay gap is widening during lockdown.

Schooling and looking after children at home places a large burden on families who are also weathering the economic impact of the COVID-19 pandemic. In many cases, this means changing work patterns, the IFS study said.

Women are persistently less present in the labour market than men, according to the World Economic Forum’s Global Gender Gap Report 2020. On average, about 78% of adult men (aged 15 to 64) are in the labour market, while only 55% of women of the same cohort are actively engaged in work. 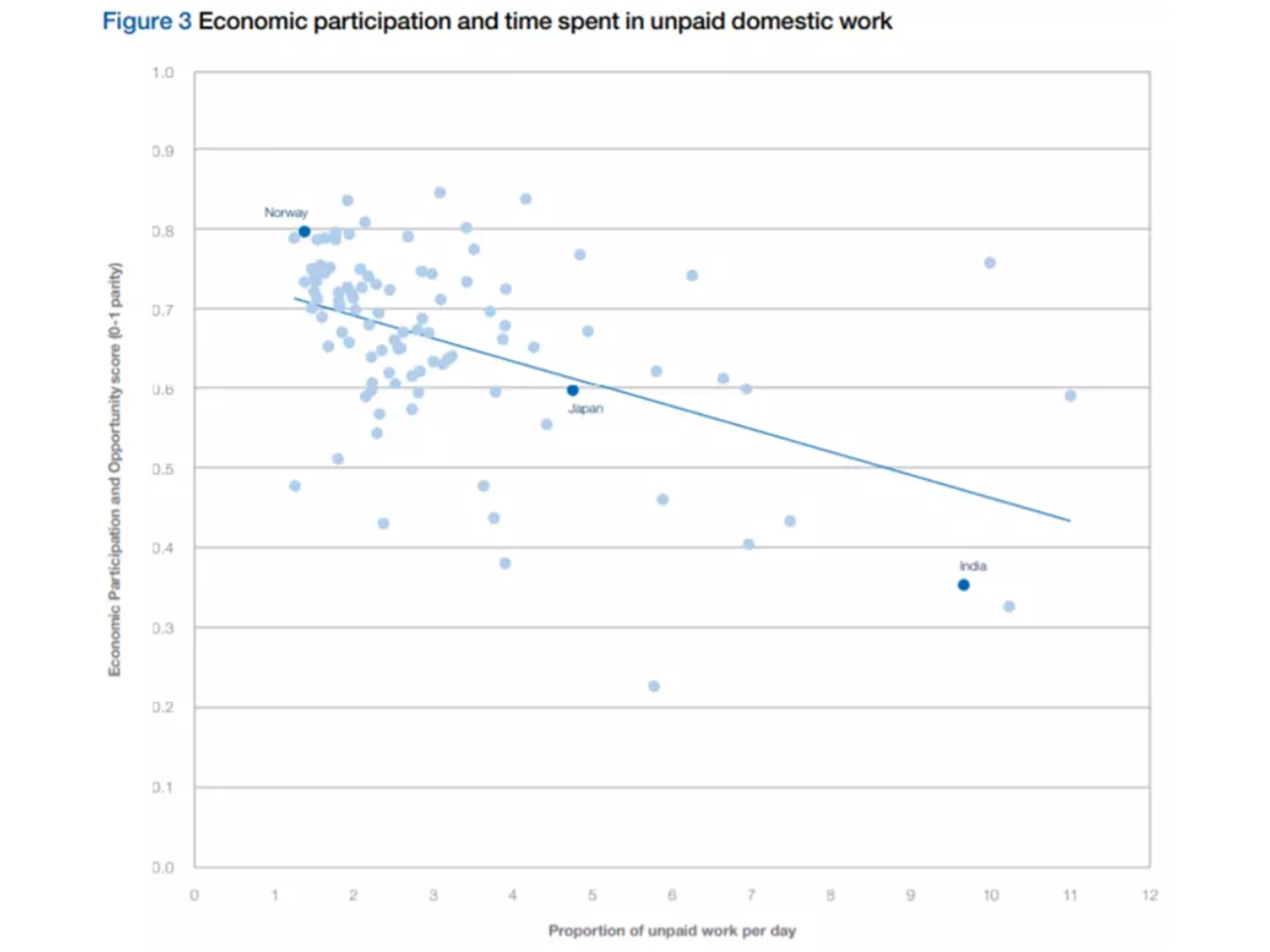 A ratio of one means women spend the same share of their time on these activities as men; a ratio of two means twice as much – and so on.

Women often lack the opportunities to participate fully in economic life, according to the World Bank, and these “opportunity gaps” mean they could be disproportionately affected by the COVID-19 pandemic. It cites examples from UN Women showing that women are less likely than men to participate in the labour market and more likely to be unemployed.

Even so, there might be a silver lining in the IFS study. One positive is that the “substantial shock” to families’ typical arrangements gives men a greater awareness of the “scale and scope” of domestic tasks; this could result in a longer-term shift in how family members divide paid work and unpaid household responsibilities, the report said.