Inicio/Centro de Prensa/Noticias/No Country for Old, Indigenous Women: The challenge of discrimination in Latin America and the Caribbean

No Country for Old, Indigenous Women: The challenge of discrimination in Latin America and the Caribbean

«would you decribe yourself as part of a group than is discriminated against in your country?»

“Would you describe yourself as part of a group that is discriminated against in your country?” At the beginning of this decade a peak of more than 40% of Bolivians, 30% of Brazilians and almost 35% of Guatemalans answered “Yes” to this question. The perception of discrimination, in whatever form people feel it, is an issue in many LAC countries. On average, 17% of all Latin Americans reported that they perceived themselves as part of a group that was discriminated against in 2015. However, these average numbers hide the vast heterogeneity among different groups in the population. As we know, when it comes to discrimination—certain groups are much more adversely affected that others. Discrimination can take place along many axes—though some of the most common are race, gender, age, sexual orientation, and disability

Discrimination is not only intrinsically unfair and harmful, but it can also have instrumental consequences for development. When discrimination takes place in the labor market, it can limit efficiency as it constrains certain individuals from generating income and actively contributing to growth. One way to think about the generation of household income is the assets-based approach. In brief, this approach argues that households generate income by accumulating assets (for example, by gaining human capital through higher education), using those assets intensively (for example, by putting education to work in the labor market), and obtaining returns to those assets (for example, by receiving a fair wage for work).  However, if there are structural barriers (such as discrimination), which hold households back from effectively accumulating, using, and/or obtaining returns to assets, both individuals and countries will lose out on this untapped economic potential. The figure above suggests that in Latin America, this is the case of indigenous people.

Discrimination is closely linked to the notion of equality of opportunity –commonly described as the need to ensure a “level playing field.” This would suggest that the circumstances beyond one’s control (such as race, gender, age, sexual orientation, disabilities) should not determine one’s chances for advancement. This is associated with the Rawlsian idea of “justice as fairness.” Where discrimination takes place, the playing field is systemically uneven—creating a dynamic in which inequalities are likely to be persistent over time, getting passed from one generation to the next. In this way, discrimination interacts with equality of opportunity to the influence equality of outcomes (an ex-post notion which refers to the way resources are distributed among society).

A 2019 paper by Campos-Vazquez and Medina-Cortina sheds light on the longer-term effects of discrimination in LAC. Taking advantage of a unique survey in Mexico, they show how skin color affects inter-generational mobility. The following figure reproduces their findings as reported in Table 1 of the paper. It shows how much an individual’s parents’ wealth matters for determining their current wealth status—differentiating between three skin color groups: “white,” “light and medium brown,” and “brown and dark brown.”[i]

The figure can be interpreted as follows: The population of Mexico is divided into “quintiles” based on an individual’s parents’ wealth, with Quintile 5 (Q5) representing the richest group and Quintile 1 (Q1) representing the poorest group. The arcs represent the transitions from the individual’s parents’ wealth to current wealth. Where there is no social mobility (i.e. individuals remained in the income group of their parents), there are no arc lines crossing between the different quintiles in the figure. For example, while only 12 per cent on those in the “white” color group remain in the same quintile than their parents, 48 per cent of those in the “brown and dark brown” skin color group do so.  When there is economic mobility, the arc lines show its direction; the number at the base is the share of the people of the quintile of origin (the parent’s) that moves towards the quintile where the arc lands (representing the individual’s current wealth). For instance, among people in the “white” skin color group in Q2, 17 per cent moves downward to Q1 and 22 per cent moves upward to Q5. In the medium dark group these shares are 29 and 9 respectively. 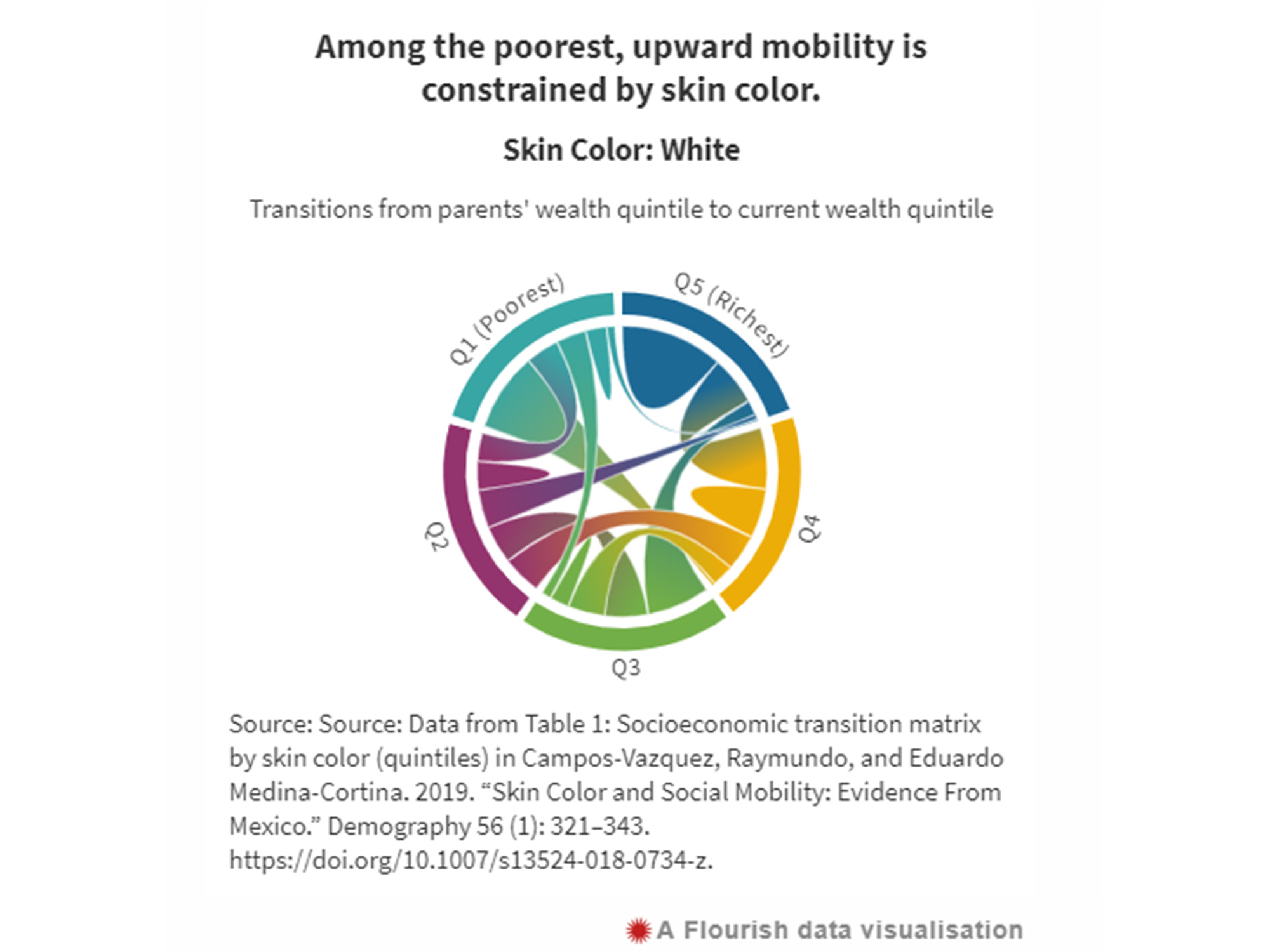 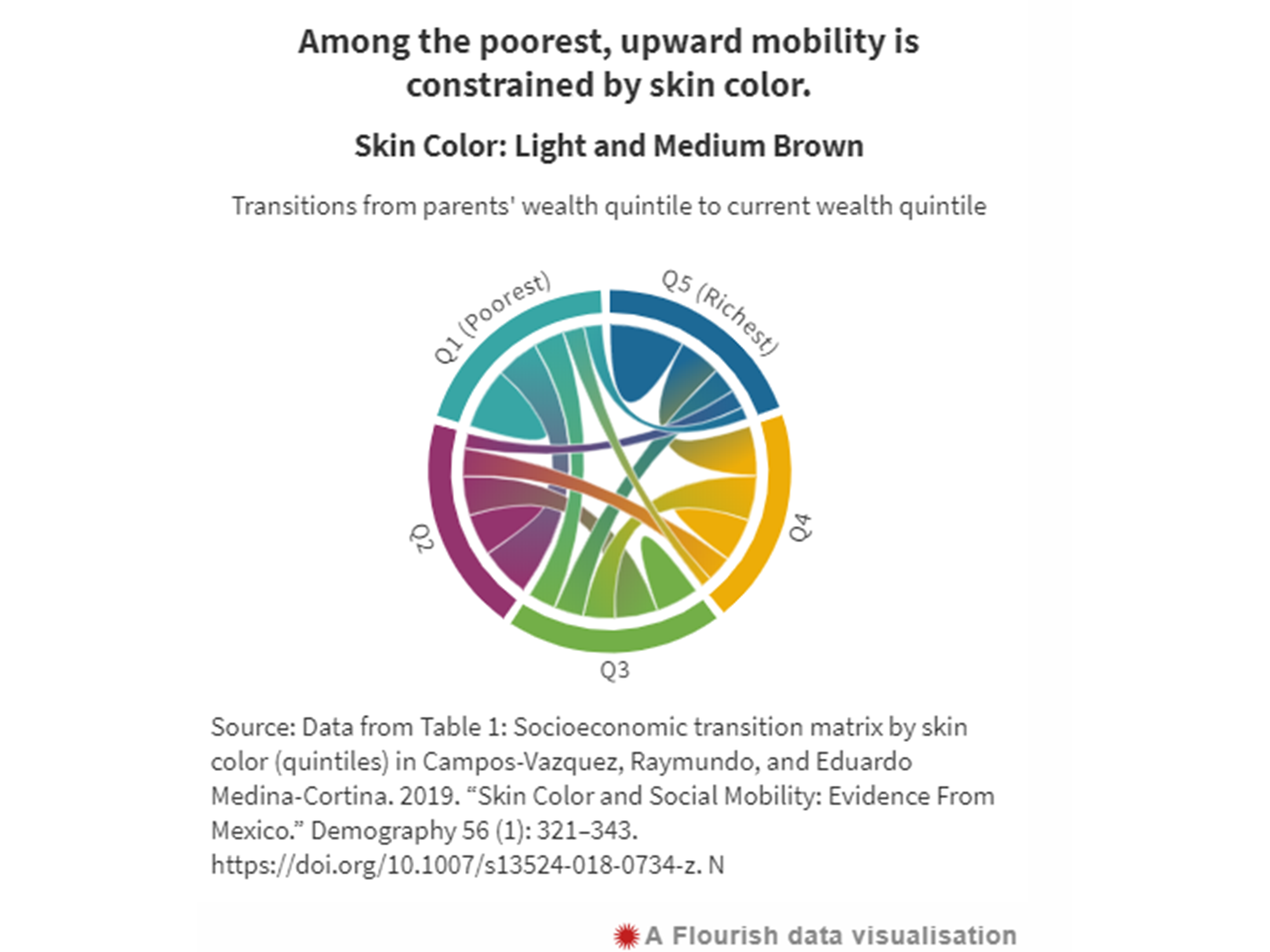 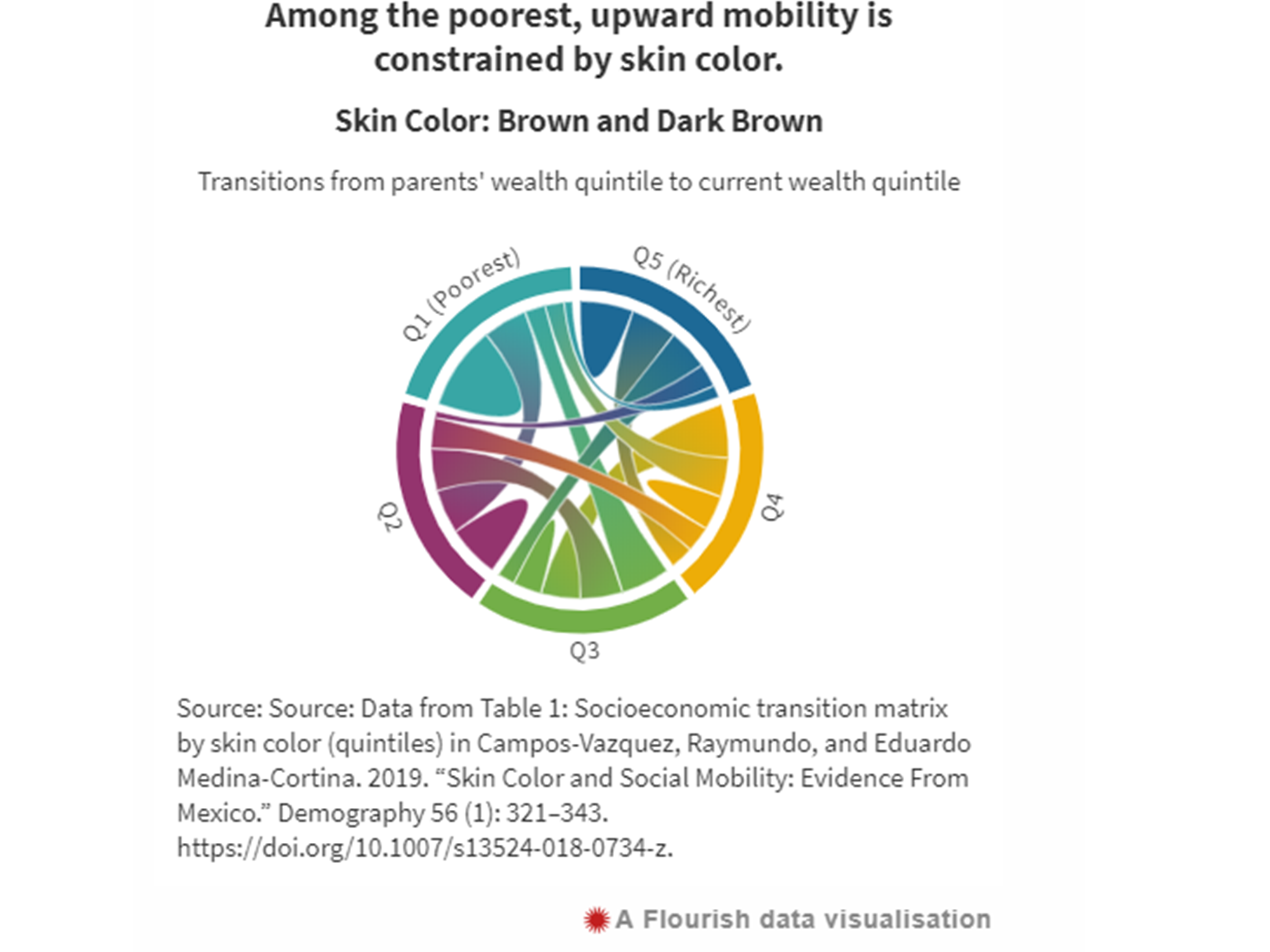 If countries are to successfully “leave no one behind” in the implementation of the 2030 Agenda for Sustainable Development, they must take action to reduce discrimination. While policies to ensure that all individuals have equal opportunities to accumulate, use, and receive fair returns to their assets are critical in promoting a more “level playing field”—we also need to think about how to change the harmful social norms that these processes are embedded more broadly within. If we do not also change the informal institutions that prop up discrimination, simply changing formal laws will be insufficient to promote behavioral change. In its role as a focal point for coordinating behavior, formal law can help to jumpstart this norm shift.

[1] Predictions of a probit estimation where the interactions of dummy variables for indigenous, old (>50 years) and gender are plotted. Year and country dummies are also included. Data from Latinobarómetro waves of 2010,2011 and 2015. [1]Data on skin color was collected in the survey by trained interviewers using the palette of 11 skin tones developed by Princeton University’s Project on Ethnicity and Race in Latin America (PERLA) and then aggregated into the categories used in the analysis as follows: white (PERLA 1-3), light and medium brown (PERLA 4-5), and brown and dark brown (PERLA 6-11).