[UNDP, 8 December, 2017]:  RUBIS Energy Jamaica, Island Grill, Facey Commodity, Petroleum Corporation of Jamaica, Development Bank of Jamaica and the Jamaica Chamber of Commerce will become the first in the English-speaking Caribbean to submit their internal operations for review, revision and strengthening, with the aim of securing a Gender Equality Seal globally coordinated by the UN Development Programme.


The local enterprises officially came on board the Gender Equality Seal Certification Programme at a launch ceremony in Kingston, on Tuesday 5 December. Top executives signing the commitment board included Thalia Lynn of Island Grill, Alain Carreau of Rubis Energy Jamaica, Larry Watson of the Jamaica Chamber of Commerce, Everton Morgan of Facey Commodity and Milverton Reynolds of the Development Bank of Jamaica.

The Jamaica Chamber of Commerce will have a unique dual role in the process, as they will seek to earn the Gender Equality Seal, and then operate as a “Certification Centre” for local, private and public sector companies in Jamaica.

Companies which earn the Gender Equality Seal, at either the Gold, Silver or Bronze level are those that have demonstrated achievements in gender-equality practices through recruitment, organizational placement, wages, times and working hours, opportunities, care of the vulnerable, sexual harassment protocols and budget allocations for gender activities. The programme aims to address persistent gender gaps in the workplace by encouraging the relevant entities to create equitable conditions for both men and women and establishing environments where women’s work and contributions are equally valued.

UNDP Resident Representative Bruno Pouezat said the benefits from this investment would flow well beyond the boundaries of the enterprise. “Companies establishing such a gender-equitable footprint will generate a ripple effect in favour of gender equality throughout Jamaica,” he stated.  He congratulated the companies for taking a bold step that he said would earn them regional and international goodwill and strengthen their corporate social profile.

Culture, Gender, Entertainment and Sport Minister, Hon. Olivia Grange, lauded the private sector companies to be the first on board, noting that this has positioned their companies and Jamaica to pioneer this gender equality approach in the workplace under the UNDP coordinated programme.

“Jamaica is positioned to lead the way in spearheading this vital tool, as we are the first English-speaking country in the Caribbean to pilot the programme,”she observed.

Guest Speaker Minna Israel, Special Advisor to the UWI Vice Chancellor on Resource Development charged local companies to follow the lead of the six local enterprises by investing in the certification programme as part of their Corporate Social responsibility outreach. She congratulated the six companies, calling them first corporate responders to the UNDP programme and further noted it would be important to communicate the benefits, value and achievements of the Gender Equality Seal. 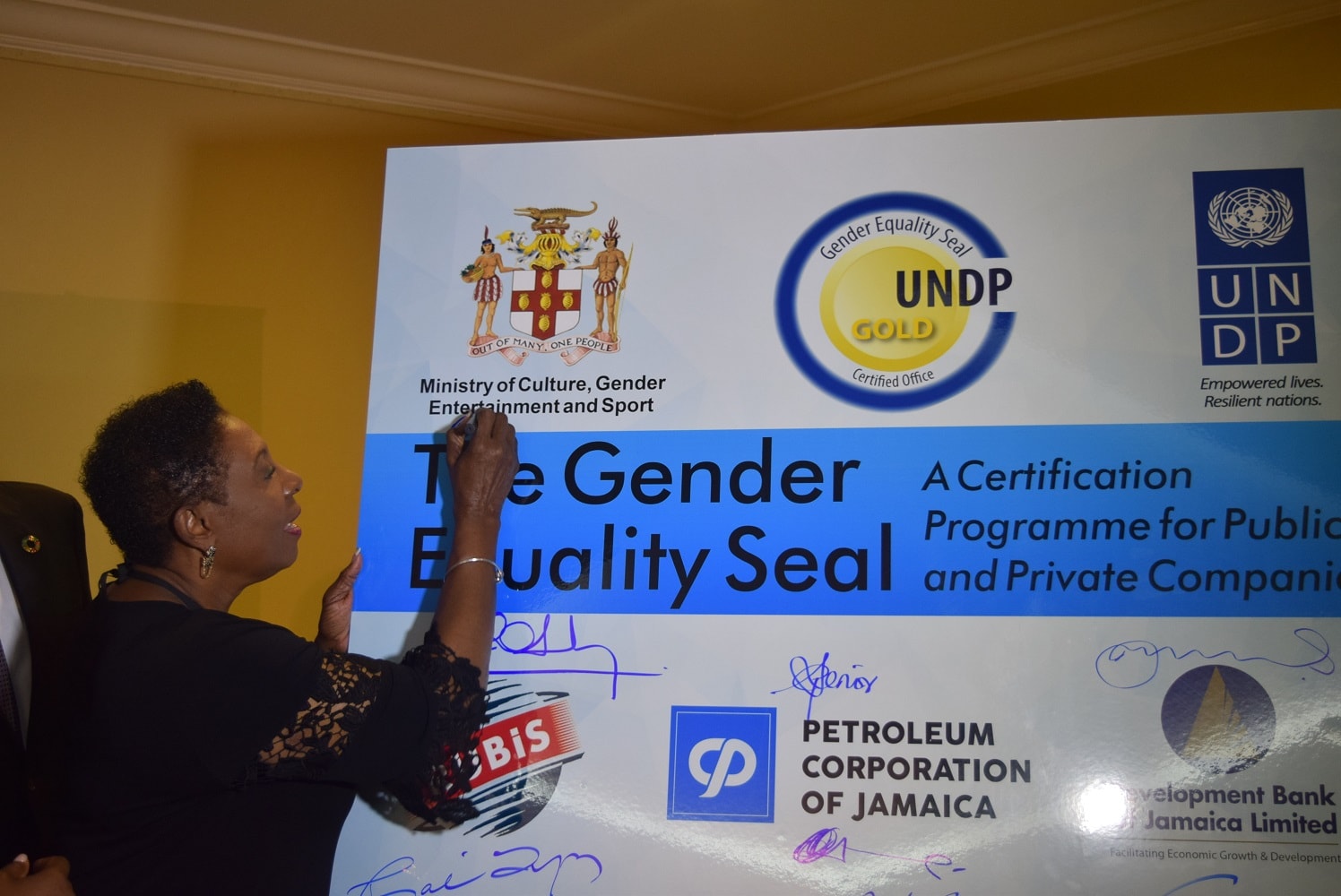 The Gender Seal certification programme has been known to boost productivity and profitability in private and public sector enterprises using gender mainstreaming strategies. Supported by UNDP, more than 1400 enterprises in Latin American countries, including Brazil, Chile, Costa Rica, Colombia and Mexico, have participated in the certification process and have reported impacts on employee productivity, brand reputation and profitability.

This international Gender Equality Seal Certification Programme for Private and Public organizations was introduced to the Jamaican private sector in 2016 during special introductory sessions culminating with a major information session in December 2016.  The programme is being piloted in Jamaica for the first time – after a successful run in Latin America – with the support of the UNDP in Jamaica in partnership with the Bureau of Gender Affairs, and the Ministry of Culture, Gender, Entertainment and Sport.

UNDP partners with people at all levels of society to help build nations that can withstand crisis, and drive and sustain the kind of growth that improves the quality of life for everyone. On the ground in more than 170 countries and territories, we offer global perspective and local insight to help empower lives and build resilient nations.